ROB FORD LEARNS HIS CANCEROUS TUMOUR HAS SHRUNK MORE THAN 50 PERCENT, SURGERY COULD BE SCHEDULED SOON

Rob Ford has received some good news for Christmas.  In fact, the city councillor and former Toronto mayor calls it “incredible news.” 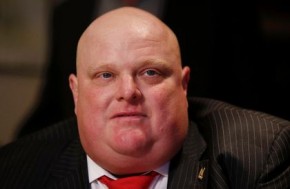 Ford told the Toronto Sun’s Joe Warmington that doctors at Mount Sinai have told him the extensive chemotherapy he’s been taking is starting to work.  He’s learned the cancerous tumour in his abdomen has shrunk by more than 50 percent and his medical team can begin thinking about scheduling surgery to remove it.  Ford says doctors told him the tumour has reduced in size from 13 centimetres to 6 centimetres.  Ford is now undergoing his fifth session of chemo since doctors diagnosed him with liposarcoma in September, a diagnosis which forced him to leave this year’s mayoral race.  Ford says he’s been told “this should be his last round of chemotherapy and next they will do radiation before having a surgery.”  He also says he is “blessed to have such good medical care.”