GERMAN FOUNDATION ASKS: WAS THIS PAINTING STOLEN BY NAZIS? 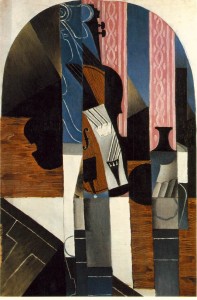 A foundation in Germany wants an expert panel to rule on whether a painting it owns – was looted by the nazis.

The state-run Kunstsammlung Nordrhein-Westfalen says its research disagrees with claims by the heirs of Jewish collector Alfred Flechtheim – that the painting belonged to him – when it was sold in London in 1934.

The foundation has requested the Limbach Commission to determine the rightful owner of Gris’ painting “Violin and Ink Bottle on a Table,” – which it purchased in 1964.

Restitution efforts for Nazi-looted art has accelerated in Germany, since the revelation last year that collector Cornelius Gurlitt had hoarded hundreds of valuable paintings at his Munich apartment- some of which had been stolen from Jewish owners before the Second World War.