A tradition of Christmas television with a Toronto connection celebrates its fiftieth anniversary tomorrow. 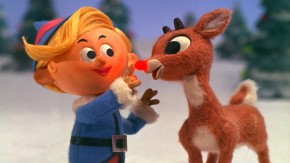 Rudoph the Red-Nosed Reindeer was first broadcast on December 6th, 1964. The stop-action animation featured the voices of many Canadian actors, including Paul Soles as Hermey the Elf and Billie Mae Richards as Rudolph.

Rudolph was produced by a New York company. Paul Soles says the company chose to record the voices here because “Toronto had possibly the best pool of English-speaking voice actors.”