Want to boost your brain power as you age?  Researchers say practicing hatha yoga three times a week dramatically improves cognitive function in zoomers.  Scientists studied over 100 people aged 55-plus.  They found after just 8 weeks of doing hatha yoga, the people in the study performed better on tasks including information recall, mental flexibility and task switching.  Hatha yoga is an ancient spiritual practice that involves meditation and focused breathing while an individual moves through a series of stylized positions. It’s become the most popular form of yoga and also the most basic. 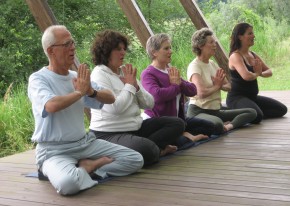 The team reported the findings in The Journals of Gerontology Series A: Biological Sciences and Medical Sciences.