Federal Liberals are celebrating Canada Day with two newly elected Members of Parliament.  Justin Trudeau’s Liberals won both by-elections in Toronto.  Arnold Chan held onto the Liberal seat in Scarborough-Agincourt, which was left vacant by Jim Karygiannis.  And Adam Vaughan unseated the New Democrats in Trinity-Spadina.  The former Toronto city councillor gave credit to the party’s leader for the victory.  “Justin, you promised a big team.  My goodness! That’s a big team,” Vaughan smiled as he looked at all the supporters behind him at his victory party, “Justin thank you very much.  I’ve been introduced as the new MP.  This is the next prime minister of this country because we’re going to do the hard work and deliver.  We’re on our way!” 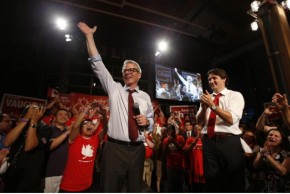