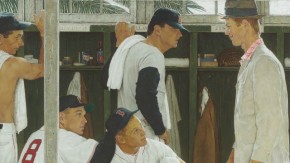 A 1957 Norman Rockwell painting of Boston Red Sox players will soon go up for auction in New York city.  But not before a reunion of the painting’s subjects at Boston’s Fenway Park.  The painting shows pitcher Frank Sullivan, right fielder Jackie Jensen, catcher Sammy White, second baseman Billy Goodman and Hall of Famer Ted Williams. Sullivan says when he and a few teammates were told to go pose for Rockwell, they didn’t realize what a big deal it would become.  “We were told to take our uniforms to Stockbridge and meet this man and he was going to take pictures of us,” Sullivan explains, “so we had to drive all the way out there and back on our day off and we had no idea who he was.”

Sullivan and the model for the rookie, Sherman Safford, were with the Norman Rockwell painting at Fenway last evening. A New York City auctioneer says it could bring up to $30-million at auction.  The painting appeared on the cover of the Saturday Evening Post on March 2nd 1957.  It’s been exhibited at the Museum of Fine Arts in Boston.