There are calls for criminal charges after an anti-immigration flyer was distributed to homes in Brampton. 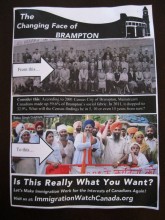 Premier Kathleen Wynne was asked about the flyers at yesterday’s Khalsa Day parade. She called it a “hateful piece of literature” that has no place in our society.

The other provincial leaders had similar reactions. Conservative leader Tim Hudak said we should say “thank you” to the Sikh community for their contributions to Ontario. NDP leader Andrea Horwath says we should celebrate the fact that our country was built by many different cultures.

A group calling itself Immigration Watch claimed responsibility for the flyers. Spokesman Dan Murray says they’re based on free speech and says he doesn’t believe there is any basis for charges to be laid.

Peel Region police are investigating whether the flyers fall under hate crimes legislation.