A few patients who’ve lost their sight due to a rare disorder are regaining some vision thanks to a procedure performed at the University of Michigan.  The Ann Arbor school’s Kellogg Eye Center is the first such facility in the U.S. to implant an artificial retina since the U.S. Food and Drug Administration signed off on the procedure  last year.

Four such surgeries have been performed at the facility in Michigan. A fifth is scheduled for next month.

The so called “bionic eye” system includes a small video camera and transmitter mounted on a pair of glasses. Images from the camera are processed into electronic data that are wirelessly transmitted to electrodes implanted into the patient’s retina.  The surgery gives those with retinitis pigmentosa the ability to see shadows and shapes. 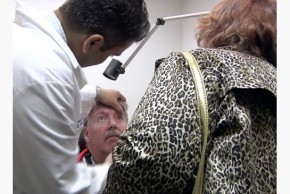 Roger Pontz is one of those who’s had his vision restored.  Diagnosed with retinitis pigmentosa as a teenager, the 55 year old has been almost completely blind for years.  Thanks to this new surgical procedure, he’s regained enough of his eyesight to catch small glimpses of his wife, grandson and cat.  “It’s awesome.  It’s exciting!  Seeing something new every day,” Pontz said during a recent appointment at the University of Michigan Kellogg Eye Center.

Retinitis pigmentosa is an inherited disease that causes slow but progressive vision loss due to a gradual loss of the light-sensitive retinal cells called rods and cones. Patients experience loss of side vision and night vision, then central vision, which can result in near blindness.  Not all of the people diagnosed with the condition can benefit from the bionic eye.