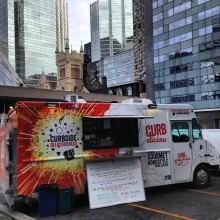 There will soon be more food trucks on the streets of Toronto.  City Councillors have voted 34-3 to cap the number of trucks allowed this year at 125 and limit the time they can park in any one spot on the street at three hours, rather than the five hours recommended by the city’s licensing committee.  Councillors also agreed to prohibit trucks within 50 metres of restaurants, but street vendors want that area reduced. Restaurant and food truck owner Zane Caplansky called the vote “progress, a step forward and something we can look at as baby steps.” Councillor Josh Colle was also in favour of expansion.  “The overwhelming majority of restaurants want this.  Why the talk of fear was happening in today’s council meeting was bizarre.”

The debate pitted Mayor Rob Ford, who said trucks should operate as they please against downtown councillors who expressed concern about the impact of the trucks on restaurants, parking and the environment.  The expanded program begins in May.  All changes will be reviewed in one year.