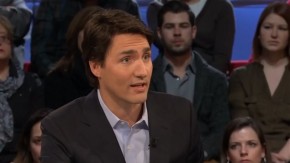 Justin Trudeau was absent from the House of Commons yesterday as the Ukrainian ambassador demanded an apology from the Liberal leader for tongue-in-cheek remarks he made about the crisis in Ukraine.  Vadym Prystaiko said on CTV’s Power Play, “You have to be extremely careful when you talk about 82 people who died fighting … for their future and everyone’s in danger.”

While on a Radio-Canada’s Tout Le Monde en Parle, Trudeau linked the upheaval in Ukraine to Russia’s Olympic hockey woes. He joked, “especially since Russia lost in hockey, they will be in a bad mood.  We ar3 afraid of a Russian intervention in Ukraine.” The show’s host Guy A. Lepage then asked Trudeau, “only because of hockey?”  “No,” Trudeau replied.  “It is an attempt to bring a light view of a situation that is extremely serious.”

Federal Immigration Minister Chris Alexander says making light of the situation in Ukraine showed bad judgement.  “Is it appropriate to make jokes about a political crisis in a very large country, a big country, in Europe that is a close partner of Canada, where 100 people at least, have been killed … most of them during the Sochi Olympics by their own security forces?  Is it appropriate in any context to make a joke about that?  We don’t think so.”

Liberal MP Marc Garneau is coming to Trudeau’s defence.  He accused the Conservatives of “trying to take advantage of this for cheap partisan reasons.”  Garneau explained that “if you look at the entire transcript, you’ll see Justin Trudeau also spoke very seriously about the situation in Ukraine during the program.”