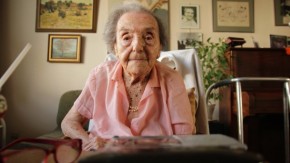 The oldest known survivor of the Holocaust has died in London.  Alice Herz-Sommer was 110.  A film about her has been nominated for best short documentary at this Sunday’s Academy Awards.  It’s her extraordinary story of surviving two years in a Nazi prison camp through devotion to music and her son.  The documentary is called The Lady in Number 6: Music Saved My Life.  The film is directed by Oscar-winning filmmaker Malcolm Clarke, who is based in Montreal.  The documentary’s producer Frederic Bohbot, also based in Montreal, says “we all came to believe that she would just never die.  There was no question in my mind, ‘would see ever see the Oscars.'” Nick Reed is another producer on the film and said telling her story was a “life-changing experience.”

Herz-Sommer, her husband and her son were sent from Prague in 1943 to a concentration camp in the Czech city of Terezin, where inmates were allowed to stage concerts in which she frequently starred.  An estimated 140,000 Jews were sent to Terezin and 33,430 died there.  About 88,000 were moved on to Auschwitz and other death camps, where most of them were killed.  Herz-Sommer and her son, Stephan, were among fewer than 20,000 who were freed when the notorious camps was liberated by the Soviet army in May 1945.

Yet she remembered herself as “always laughing” during her time in Terezin, where the joy of making music kept them going.  “These concerts, the people are sitting there, old people, desolated and ill, and they came to the concerts and this music was for them our food.  Music was our food.  Through making music we were kept alive,” she once recalled.  “When we can play it cannot be so terrible.”

Though she never learned where her mother died after being rounded up, and her husband died of typhus at Dachau, in her old age she expressed little bitterness.  “We are all the same,” she said. “Good, and bad.”