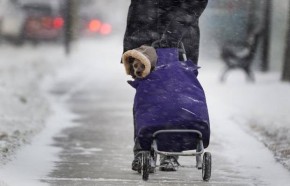 Today began with good news for TTC riders in the east end.  The Scarborough RT is operating at full service this morning after it was shut down for most of the day yesterday because of the storm.  TTC employees worked through the night to get the aging SRT back up and running.  The TTC shut down the line early yesterday afternoon so workers could clear snow and ice from the track before the afternoon commute. But it wasn’t reopened until this morning.

Wednesday’s snowfall was a record breaker in Toronto.  Pearson International Airport recorded 14 centimetres of snow; the most the city’s received on February 5th since record keeping began.   The same storm socked the U.S. northeast with up to 30 centimetres of snow and freezing rain.  Hundreds of thousands of homes and businesses are without power stateside, with Pennsylvania and New Jersey the hardest hit. Snow and ice forced airlines to scrub nearly 3000 flights in the U.S. yesterday, and snow nixed hundreds of flights in Ontario.  Now, airlines have delayed or cancelled some of today’s flights at Nova Scotia’s Halifax International Airport, due to a storm that could dump 25 centimetres of snow.