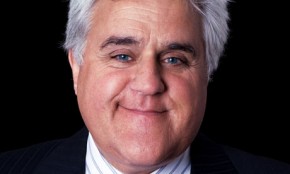 It’ll be an historic night on television, as Jay Leno hosts his final Tonight Show on NBC after 22 years.  But Leno’s departure has been relatively low key unlike his predecessors.  When Jack Paar left the Tonight Show in 1962, he passed through a set of curtains and the camera zoomed in on a card that read “No More to Come”.  Three decades later, Johnny Carson had Bette Midler serenade him on his second last show, then sat and spoke directly to his fans in his emotional finale, watched by 42-million viewers.  It was Carson who originally introduced his television audience to Jay Leno back in 1977.  “I’m glad that you’re all in a good mood tonight because it’s always a pleasure to introduce a new comedian to the Tonight Show,” Johnny explained,  “This young man’s name is Jay Leno and this is his first appearance on the Tonight Show.  Later this year, he’s going to make his film debut in the Silver Bears with Michael Kane.  He’s not bad.  Would you welcome please, Jay Leno!”

Jay Leno is making his exit from the Tonight Show at the age of 63, making way for 39 year old Jimmy Fallon to step in as host.