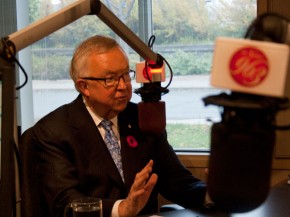 As Canada’s youngest-ever Prime Minister at the age of 39, and a politician with a storied resume, Joe Clark is arguably one of the most esteemed and respected statesmen.

Now at 74, Clark has written a book called How We Lead, an impassioned argument for Canada to reassert its international position as an agent of change, diplomacy and peace.  Joe Clark was a guest with Mike Duncan and Jean Stilwell on The New Classical 96.3FM’s Good Day GTA.  He explained that the Conservatives of today need to be a more cohesive party.  “There is a tendency to retreat to your own enclave and to take on the others,” Clark explained, “That’s very destructive, not only in a country like this, which is a less easy country to keep together than you think.  But certainly not internationally.  Internationally, we have to be as open as possible because the world is much more open than it has ever been before.”

Joe Clark left politics in 2004 and now works as a political and business consultant in Ottawa, where he lives with his wife, Maureen McTeer.  He says he enjoyed the daily cut and grind of political life, “but I don’t really miss it.  I was better at it then, than I would be now, the factor of the passage of time.  It was an immense privilege to be in a position to have the authority to make decisions, to speak in Canada’s name, to do things that could move things forward.  And you sometimes miss that.  But I don’t lament it.  I had this great privilege for literally a quarter of a century one way or another in the House of Commons, and I’m grateful for that.”

Joe Clark’s How We Lead: Canada in a Century of Change is published by Random House of Canada Ltd.