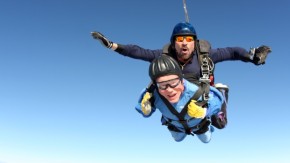 Vern Maynard of Palm Desert, California did what he always wanted to do when he reached his 100th birthday yesterday.  He went skydiving!  Jean Walcher of the U.S. Parachute Association says Maynard and his two great nephews made their first skydive along with trained instructors from a height of 4000 metres southeast of Los Angeles.  The jump happened after Maynard obtained a doctor’s note saying he was healthy enough to try it.  Maynard’s daughter Linda Hironimus says her father’s friends made arrangements for him to skydive after he said he always wanted to try it.