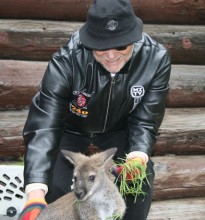 A baby wallaby at Toronto’s High Park Zoo has officially been named Zoomer after Moses Znaimer’s company ZoomerMedia.  “We’ll come and visit her regularly,” said Moses at Sunday’s naming ceremony, “I can see her on a big billboard!”

Moses attended the naming ceremony yesterday at High Park, along with zoo activist, Parkdale-High Park Councillor Sarah Doucette.  ZoomerMedia donated $10,000 toward the Honey Family Foundation  earlier this year, to help the Zoo stay open after funding was cut off by the City of Toronto.  Sean Lee is one of many Toronto residents who regularly brings his kids to see the animals at the High Park Zoo.  His family is happy that Zoomer has her name.  “I think it’s a great name for a great animal.  My kids love watching the wallabies!”

The High Park Zoo is celebrating its 120th anniversary this year.  It’s the oldest zoo in North America.