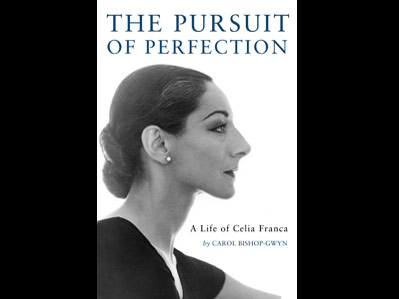 A book about the founder of the National Ballet of Canada by a Toronto author leads the long list for this year’s Charles Taylor Prize for non-fiction.

The Pursuit of Perfection: A Life of Celia Franca was written by Toronto’s Carol Bishop-Gwyn.

She’s one of four Toronto authors on the list. The others are Modris Ecksteins for Solar Dance: Genius, Forgery, and the Crisis of Truth in the Modern Age…… Sandra Martin for Working the Dead Beat: 50 Lives That Changed Canada …. and Noah Richler for What We Talk About When We Talk About War.

Noach Richler is the son of the late Mordechai Richler.

A total of 15 books by Canadian authors are in the running for the $25,000 Charles Taylor Prize. The short list will be announced January 9th, and the winner will be presented at a gala at Toronto’s King Edward Hotel on March 4th.

1. The Pursuit of Perfection: A Life of Celia Franca; Carol Bishop-Gwyn [Toronto].
2.  Warlords: Borden, Mackenzie King, and Canada’s World Wars; Tim Cook  [Ottawa].
3.  Walls: Travels Along the Barricades; Marcello Di Cintio [Calgary]
4.  Journey with No Maps: A Life of P.K. Page; Sandra Djwa [Vancouver]
5.  Solar Dance: Genius, Forgery, and the Crisis of Truth in the Modern Age;  Modris Ecksteins [Toronto]
6.  A Season in Hell: My 130 Days in the Sahara With Al Qaeda; Robert Fowler [Ottawa]
7.  Plutocrats: The Rise of the New Global Super-Rich and the Fall of Everyone Else; Chrystia Freeland [New York City]
8.  March Forth: The Inspiring True Story of a Canadian Soldier’s Journey of Love, Hope and Survival; Trevor and Debbie Greene [Nanaimo]
9. Leonardo and The Last Supper; Ross King [Oxford] — also winner of the Governor General’s Award for non-fiction
10. Working the Dead Beat: 50 Lives That Changed Canada; Sandra Martin [Toronto]
11. Sword of the Spirit, Shield of Faith: Religion in American War and Diplomacy; Andrew Preston [Cambridge]
12. What We Talk About When We Talk About War; Noah Richler [Toronto]
13. Chronic Condition: Why Canada’s Health-Care System Needs to be Dragged Into the 21st Century; Jeffrey Simpson [Ottawa]
14. Epistolophilia: Writing the Life of Ona Šimaithe; Julija Šukys [Montreal]
15. The Universe Within: From Quantum to Cosmos; Neil Turok [Waterloo]