The Ford government is spending $1B to expand COVID-19 testing and contact tracing. In revealing the third pillar of its preparedness plan, Health Minister Christine Elliott and Premier Doug Ford say the province is also changing the criteria for who gets a COVID test, shifting those without symptoms away from assessment centres and allowing only those with symptoms or who’ve had contact with someone who’s positive. 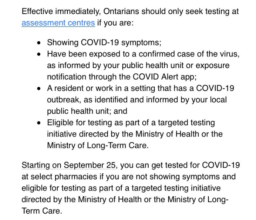 “There are people who  want the test, just for getting a test, I understand that, and then there’s people that need it and so what we want to do is re-route the folks to the pharmacies and take the load off the public system,” said Ford.
But some asymptomatic people can still get tested including long term care workers or those living in or working at an outbreak site.
Ford says the new rules will help reduce long lines and again blames Health Canada for dragging its feet on approving rapid testing which he calls a game changer.
The Premier is monitoring himself for symptoms of COVID-19 after a junior member of his team tested positive. He tweeted that he’s had not close contact or prolonged exposure to the person but will closely monitor for symptoms. 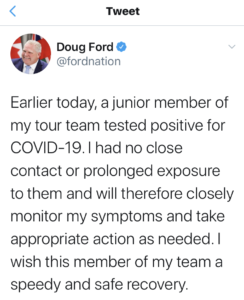 Despite the number of new cases over 400 again for the third time this week, Ford says he wants to avoid further restrictions that would impact the economy as long as possible.
Meantime, there seems to be mixed messaging from the Prime Minister and Premier Ford when it comes to Thanksgiving and Christmas gatherings.
“Thanksgiving is a great time to get together with your family and loved ones but we’re just asking people to follow the protocol and keep it to 10 people and under,” Ford told reporters.
Justin Trudeau told the nation during his televised address Wednesday evening that it’s likely families won’t be gathering for Thanksgiving but we “still have a shot at Christmas.”