Doug Ford says in 200 sessions of the legislature, he’s never heard anyone swear until now, when New Democrat Taras Natyshak called the Premier “a piece of sh**.”

The Essex MPP says Ford’s failure to deal with COVID-19 outbreaks among migrant farm workers in the Windsor region has devastated lives and businesses. The Premier says it’s water off a duck’s back. 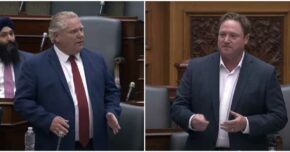 “I forgive the guy, let’s just move on, my main focus is I want to protect the people of Essex,” said Ford during his daily pandemic briefing.

The member from Essex withdrew the comment and later apologized to the Premier.

“During Question Period in the House, I used unparliamentary language and I want to take the opportunity to apologize to the Premier and my colleagues,” said Natyshak. He went on to say the fear he has for his community got the best of him.

Meantime, Ford is promising that migrant workers will be protected and not lose their jobs if they test positive.

Parts of Windsor-Essex will move to stage two of re-opening Thursday but Leamington and Kingsville will remain in Stage one due to the outbreaks on farms.