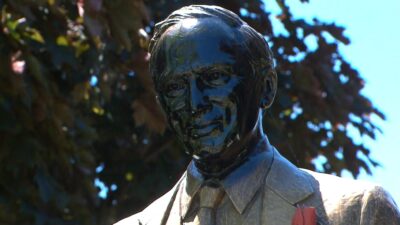 A life-sized statue of Pierre Elliot Trudeau has been vandalized in a Vaughan park. A photo posted on social media shows the bronze statue of the former prime minister with black paint on the face. York regional police say they’re investigating and are appealing to witnesses. Police have confirmed specially-trained hate crime investigators are helping to find those responsible.York Regional Police Staff Sgt Dave Mitchell says a passerby phoned it in.

“Somebody has spray painted the face of the former Prime Minister and it is an act of vandalism and in these times, I’m not sure what accomplishes,” said Sgt. Mitchell.

York Regional police didn’t provide any further information in a tweet about the vandalism. 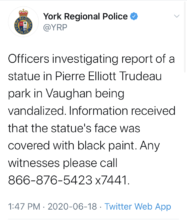