Queen guitarist Brian May says he recently had three stents put into arteries leading from his heart after a small heart attack.

The 72-year-old, who shared his story  , says the stents were put in after his doctor drove him to a hospital when he starting experiencing symptoms. “When I came around, it was as if nothing happened,” says May in his posted video. “I didn’t feel anything and I still can’t, it’s been amazing.” 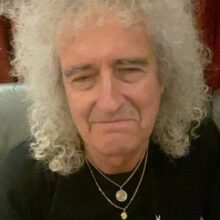 Just weeks earlier, the Queen guitarist was treated for a muscle tear after working in his garden.