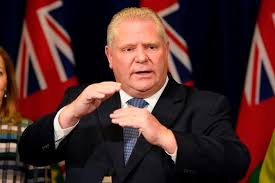 Doug Ford says nobody wants to get the economy moving more than he does. But the Premier says a framework for a gradual re-opening will have strict criteria. He would not give specifics, except to say that one of the first areas may be outdoor activities and the plan will be revealed in the coming days. Ford says he’s being lobbied from all sides to resume normalcy after new modelling released yesterday suggested community spread of COVID-19 is peaking in Ontario. Among those pushing Ford for answers is his 12-year-old nephew, the son of the late former Toronto mayor Rob Ford, who wants to make sure he can go to summer camp. Finance Minister Rod Phillips will oversee the province’s plan for re-opening the economy. Ford is urging Ontario residents to remain patient and continue to practice physical distancing.