Mark Bourrie is the winner of the RBC Taylor Prize for literary non-fiction. 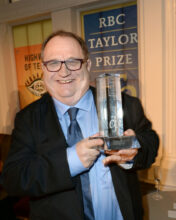 The Ottawa journalist and historian was awarded the honour and $30,000 for Bush Runner.

He beat out four other authors to win this year’s Prize, which is shutting down after two decades of celebrating Canadian non-fiction writing.

Margaret Atwood was among the jurors who culled the 2020 short list from a record 155 submissions.