BARRICADES MUST COME DOWN, SAYS THE PRIME MINISTER

Prime Minister Justin Trudeau says it’s time for the rail blockades to come down because Canadians have had enough. 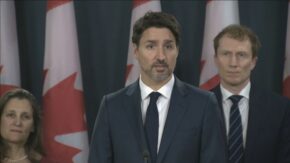 Trudeau says after weeks of blockades on rail lines and other major transportation routes, the situation is unacceptable with goods not moving and workers being laid off. He adds the government has exhausted every possibility in hopes of finding peaceful solutions to de-escalate the situation. At an Ottawa news conference, the PM says there’s no point making the same overtures to Indigenous leaders if they aren’t being accepted. Most of the country’s rail system has been paralyzed by the blockades by supporters of the hereditary chiefs of the Wet’suwet’en Nation in B-C who oppose a natural gas pipeline on their traditional territory.Trudeau says his government is always open to dialogue, and reconciliation is still a top priority.