OPERA WILL HOST LEGEND DESPITE ACCUSATIONS AGAINST HIM 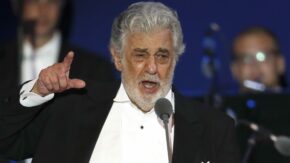 The 80-year-old Domingo has withdrawn from all
U-S performances since reports last year detailed accusations of sexual harassment or other inappropriate, sexually charged conduct. While American outlets have dropped Domingo, he continues to perform in Europe. He received a standing ovation in Milan in December and had two sold out shows in Berlin in January.The Israeli competition will be held in October at Tel Aviv’s opera house.