An MPP who quit Doug Ford’s Tories over French-language cuts is joining the Liberals. 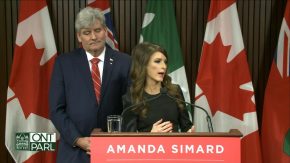 Amanda Simard has been sitting as an independent since leaving the government caucus in late 2018. Unhappy with what she calls a complete shift in the PC party, Simard says she’s excited to help rebuild and modernize the Liberal party and offer Ontarians the government they deserve. She told reporters “This is the party of the future.” With Simard joining their ranks, the Liberals will have six seats in the legislature, still short of the 12 needed for official party status. She was first elected 2018 at the age of 29  to represent a largely French-speaking eastern Ontario riding.