A new poll shows support for the Ontario Liberals has surged ahead of the Ford Progressive Conservatives. 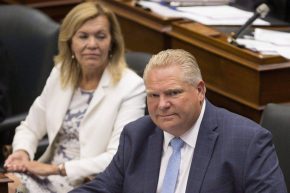 The Pollara Strategic Insights survey puts the Liberals at 33 per cent support, PC’s with 29, New Democrats at 27 and the Greens with 9 per cent support. Just two years ago, Premier Doug Ford’s Tories ended a Liberal dynasty that dated back to 2003 with a landslide victory. Pollara president Craig Worden said it remains unclear if the current turmoil in Ontario schools is having an impact on the polling results.