The Impeachment Inquiry into U-S President Donald Trump has been released by the Republicans, ahead of the Democrats. According to sources, the 300-page report lays out historical precedent for impeaching a president saying it proves the president abused the office for his own personal and political gain. 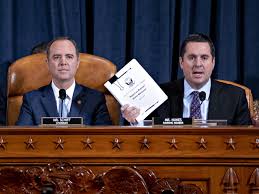 The House Intelligence Committee is expected to vote Tuesday evening to send it to the House Judiciary Committee, where it’s expected to serve as the basis of articles of impeachment, that would be drafted in the coming days. According to House Intelligence Committee chair Adam Schiff, “I think what we have produced in remarkable in short order is so overwhelming that it ought to be presented to the judiciary committee now without any further delay.” The democrats claim their inquiry uncovered overwhelming evidence that President Trump abused the powers of his office for his own personal and political gain. The Republicans maintain the Democrats of rushing to impeach without any evidence that Trump did anything wrong.