The New York City Ballet’s production of The Nutcracker has broken a barrier. 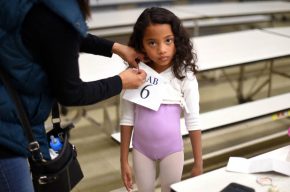 For the first time, the company has cast a black actress to play the role of Marie. Charlotte Nebres landed the role in the production staged by the New York City ballet since 1954. The young actress is just 11 and a student at the School of American Ballet. Her mom’s family is from Trinidad and her dad’s family hails from the Philippines. Theatergoers can witness Nebres’ history-breaking performance in “The Nutcracker” through January 5.