Kingston Police say seven people have died after a small plane crashed in the area Wednesday evening. The Transportation Safety Board has sent investigators to the crash site to examine the wreckage. Officials say the Piper P-A-32 left Buttonville Airport in Markham heading for Kingston airport, but crashed 6 kilometres north of Kingston’s Norman Rogers Airport. Police say the area was under a wind advisory at the time. Officials say this is a common aircraft, built between 1965 and 1972 and typically carries six, not seven. 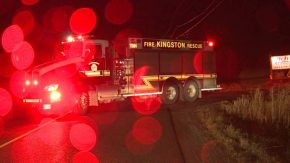