An alarming health report on the state of patient safety in Canada. New data by the Canadian Institute for Health Information finds that patient safety falls below the average in 4 out of 5 indicators. Institute director Tracy Johnson says Canada has also seen a 14 % increase in the number of surgical objects unintentionally left in patients but the findings don’t explain why or how these accidents happened.Canada does however continue to perform well in others areas related to quality of care. Survival rates for breast and colon cancer are among the highest in the world and big improvements in reducing in-hospital deaths due to heart attacks and stroke. 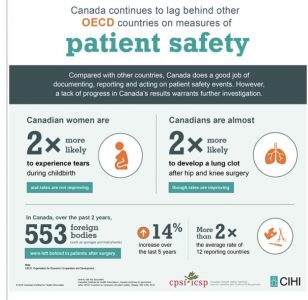 ***Obstetrical trauma rates — or tears during vaginal childbirth — are twice as high as the OECD average, and are not improving.

***Rates of avoidable complications after surgery, such as lung clots after hip or knee surgery, are 90% higher than the OECD average.

***Rates of foreign objects left behind in patients after surgery increased by 14% across Canada over 5 years. Between 2016 and 2018, a total of 553 objects, such as sponges or surgical instruments, were left in Canadian patients after surgery. Many of our peer countries, such as the United States, the United Kingdom and Australia, cannot report on this measure, which makes comparisons difficult.