A new Canadian glow-in-the-dark coin is flying of the shelves, or in this case the mint. The Canadian Mint produced the coin ..that feautures the eerie scene of a U-F-O that reportedly crashed into the waters off Nova Scotia 50 years ago. The pure silver, rectangle-shaped coins went on sale Tuesday for $130 and by noon, more than 80 percent were sold. 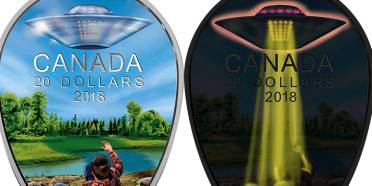 Four thousand are being produced with some going to retail stores. The coin depicts three fishermen aboard a boat, staring and gesturing as the ghostly image of a flying saucer that appears to crash into a choppy sea.