CLIMATE STRIKES IN TORONTO AND ACROSS CANADA FRIDAY

A global movement aimed at pressuring governments into action over climate change is calling on Canadians to join a mass strike Friday and “disrupt business as usual.” But many retailers in Canada seem to be ignoring that call. Only three chains are planning to shutter operations to help raise awareness about Swedish activist Greta Thunberg’s movement. The owners of Mountain Equipment Co-Op, Lush Cosmetics North America and Indigo Books Music Incorporated say they’ll shut their doors tomorrow either completely or in select locations. The climate strikes are planned in 150 countries including Canada. Meantime, People’s Party of Canada Leader Maxime Bernier calls the 16-year old Thunberg a “radical environmentlist” who’s creating panic among youth and adds more studies are needed to determine what’s causing climate change. Bernier has been criticized for calling the Swedish teen mentally unstable before he walked back those comments on Twitter. 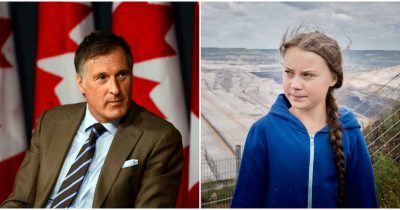 On the campaign trail Thursday, Bernier is in Western Canada. Conservative Leader Andrew Scheer and Green Leader Elizabeth May are both in Montreal. Trudeau starts his day in Sudbury before a rally later in Peterborough.The NDP’s Jagmeet Singh is spending a third day in a row in B.C.