Hurricane Dorian is due to hit Atlantic Canada Saturday with hurricane force winds.Bob Robichaud of the Canadian Hurricane Centre says the storm’s centre is expected to land near or just east of Halifax.But he adds the track of the storm is not entirely predictable.It could also weaken to a tropical depression once it gets further north.The forecast is calling for severe winds and torrential rain for New Brunswick, Prince Edward Island, Nova Scotia, western Newfoundland and Quebec’s Lower North Shore. In the United Stats, North Carolina’s Outer Banks are experiencing severe flooding after hurricane Dorian tore at the state’s eastern edge. The storm surge has inundated parts of one island, south of Cape Hatteras. 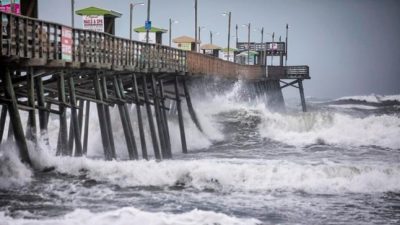 And In the Bahamas, international aid efforts are gaining momentum even as emergency crews still hunt for survivors and the missing five days after it landed. At least 30 people are confirmed dead.