Listen to a report from Christine Ross as the city’s prepares for Toronto’s International Film Festival.

Movies. Celebrities. And swag ! The red carpet has been rolled out and Toronto is buzzing as the city’s signature film festival kicks off. The luxurious 5-star Ritz Carlton is ground zero for celebrity sightings and is steps from the red carpet. On King Street across from the TIFF Bell Lightbox, restaurants are planning for a bump in business. Before walking the red carpet, and attending dozens of galas, the celebrities get glammed up. But drivers are being told to avoid a stretch of King West, that will be closed for pedestrians only. During the 10-day festival, films will be screened at several various theatres around the city, including the TIFF Lightbox, and Roy Thomson Hall. And a portion of King will feature a free pop-up street festival with music and screenings from 10 a.m. to midnight Thursday to Sunday. TIFF runs until September 15th boasting the biggest number of A-list celebrities in its history. 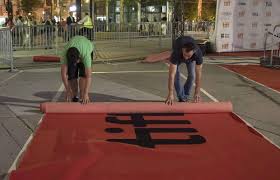