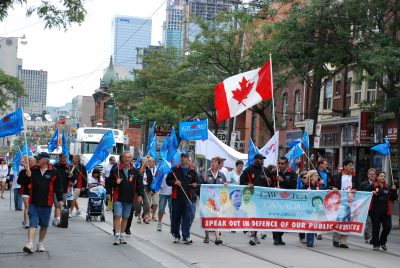 Monday is Labour Day and that means that a number of places will be closed for the holiday.

All LCBO stores, government offices and banks will be closed.  As will all Toronto libraries, recreation centres and indoor pools.

There is also no mail delivery or garbage collection Monday.

Certain Beer Stores will be open however, along with some malls.

The TTC will be operating on a holiday schedule and GO Transit will run on a Sunday schedule.

The annual Labour Day parade will also be taking place in downtown Toronto (see below for details) between 9 a.m. and 2 p.m.

Road closures will begin around the formation area for the parade starting at 7 a.m.

The public is being asked not to park within the parade route after 7 a.m.

Traffic diversions and delays can be expected in the area commencing 9 a.m. until 2 p.m.

TTC streetcar service, both eastbound and westbound, will be diverted starting at 9 a.m.

Motorists are advised to keep this information in mind when making travel plans.