The province has done an about face on plans to punish gas station owners for not posting carbon pricing stickers. 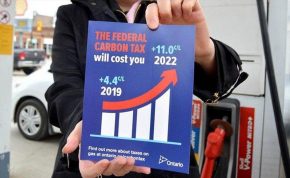 After sustained public pressure from businesses over the fines up to $10,000  a day, the Ford Tories are reportedly backing off on the hefty penalties. A published report quotes government sources saying the  revised policy, not yet made public, will instead give written warnings to gas stations that disobey or face charges under the Provincial Offences Act.In an email to a Toronto newspaper, Energy Minister Greg Rickford  was vague and would only say that the government is “moving forward with a progressive enforcement model when it comes to the education campaign.”