A hurricane warning has been issued for parts of Louisiana ahead of Tropical Storm Barry. 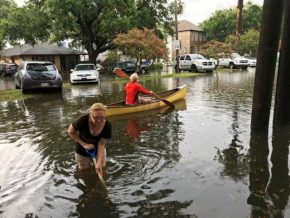 The U.S. National Hurricane Center issued the warning Thursday for coastal areas. A tropical storm warning is in effect for other areas including New Orleans. Barry is currently a tropical storm with winds of about 65 kph and was offshore  south of the mouth of the Mississippi River. The storm is likely to become a Category 1 hurricane before making landfall by the weekend. Authorities don’t expect the Mississippi River to overflow levees as it moves toward the Gulf Coast. But a change in the storm’s direction or intensity could renew the possibility of the levees being topped.  The storm could mean higher gas prices as producers brace for what could become the first hurricane of the season along the Gulf coast.