For the first time in two weeks, Premier Doug Ford appeared before the media since the ongoing appointment scandal that led to the resignation of his chief of staff. 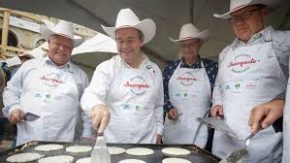 Speaking in Calgary, Ford said he acted quickly and that most people aren’t worried about the controversy. Ford wouldn’t answer directly if former chief of staff Dean French quit or was fired and praised his interim chief-of-staff Jamie Wallace as a great chief. The Premier was forced to rescind public appointments to four people because they had personal ties to French. The Premier is in Calgary with other like-minded Conservative Premiers in advance of this week’s Council of the Federation meeting in Saskatoon. Ford says he’s not in Calgary to talk about Dean French, instead, the Premiers discussed resource development, pipelines and hydro electricity.