"You Sir, are no Tommy Douglas"

Canadian actor Kiefer Sutherland is asking Premier Doug Ford to stop using his late grandfather’s name and image as part of what he calls his “political agenda.’ 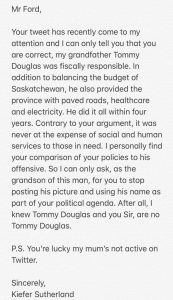 Sutherland is the grandson of the late N-D-P politician Tommy Douglas, considered the Father of Medicare. Earlier this month cabinet minister Lisa MacLeod penned an op-ed that compared the fiscal policies of the Conservative government to that of Douglas, who served as Saskatchewan premier from 1944 to 1961. Ford tweeted a link to the article writing ” It’s time to make government work for the people again not the other way around. I think Tommy Douglas would approve.” Sutherland, who grew up in Toronto, calls Ford’s comparison offensive and concluded his tweet with…”you Sir, are no Tommy Douglas. The actor says his grandfather may have balanced the budget of Saskatchewan within four years, but he also provided the province with paved roads, healthcare and electricity — and none of it was at the expense of social and human services to those in need. 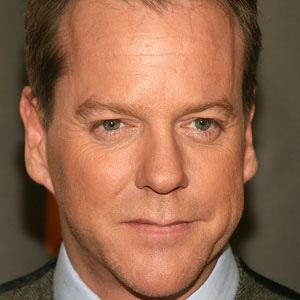