Count the late conductor Arthur Fiedler among the Boston Bruins’ fans as they skate into the Stanley Cup Final. 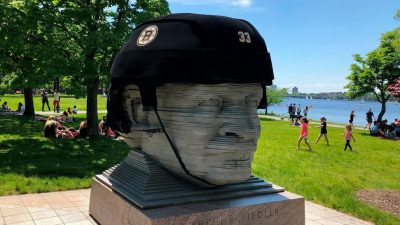 A giant Bruins helmet was placed on top of a statue of the beloved conductor of the Boston Pops Orchestra, just in time for Monday night’s Game 1 against the St. Louis Blues. The statue stands on the Charles River Esplanade, where the orchestra performs outdoor concerts during the summer. Organizers say the large Bruins helmet is 17 feet in circumference. Fiedler was a Boston icon who died in 1979.