An Ontario man says he felt “intimidated” by a voicemail left by Premier Doug Ford, heard here telling Michael Cole to be “careful” about who he calls “corrupt” after Cole texted the Premier about recent polling numbers and corruption. 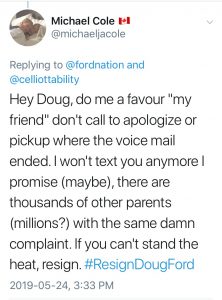 Cole says he texted Ford because he’s been angry since February after changes to the autism program, that affect his two sons. Ford’s office has released a statement that reads in part “the Premier was referring to potential legal action and takes allegation of corruption very seriously and no one can buy Doug Ford.” The NDP responded to the voicemail that was posted to Twitter saying the Premier seems to be thin-skinned and if he doesn’t like what people are saying about him, he should reverse the cuts and not threaten voters.