WHAT WILL CANADA GIFT TO NEW ROYAL PARENTS?

No word yet on the gift chosen for the newest royal parents, but Prime Minister Justin Trudeau did send Canadian well wishes after the birth of the as yet unnamed boy born to Prince Harry and Meghan Markle. Trudeau posted on Twitter that the Duke and Duchess of Sussex should “Enjoy every minute of this happy time together as a new family of three.” 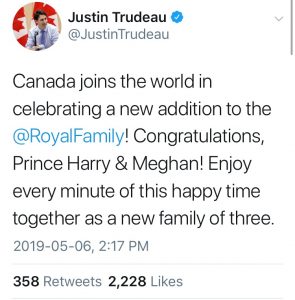 No word yet on what Canada is giving the seven-pound-three-ounce baby who doesn’t yet have a name. His older cousins, the children of Prince William and Kate were all welcomed with $100,000 donations to charities and some Canadian-made gifts. Prince George received a handcrafted blanket and mukluks in 2013, Princess Charlotte was given a Canada Goose snowsuit in 2015 and Prince Louis was given a traditional Haida blanket. Niagara Falls will be coloured in a shimmering royal blue Monday evening between 8:30 p.m. and 9:30 p.m.to commemorate the birth.