Leonardo da Vinci died 500 years ago today. The presidents of Italy and France attended a ceremony today in Amboise, France, and galleries around the world celebrated his work. A drawing of a bearded, pensive-looking man owned by Queen Elizabeth II is a portrait of Leonardo da Vinci. Martin Clayton, head of prints at the Royal Art Collection, says the sketch was made by one of Leonardo’s assistants shortly before his death on May 2nd, 1519. The portrait will go on display alongside 200 drawings from the monarch’s huge collection of Leonardo works at the Queen’s Gallery in Buckingham Palace from May 24th to October 13th.Leonardo is considered by many the ultimate Renaissance genius, combining art, science and invention. An art expert with Sotheby’s says there’s been nobody since with da Vinci’s extraordinary achievement. 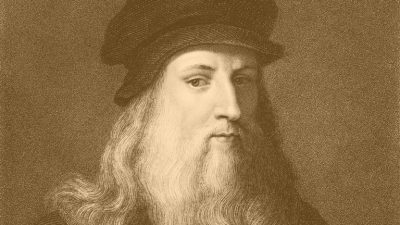