The Philadelphia Flyers have removed a statue of late singer Kate Smith outside the team’s arena. It comes just days after the statue was covered up amid allegations of racism against the 1930’s singer. 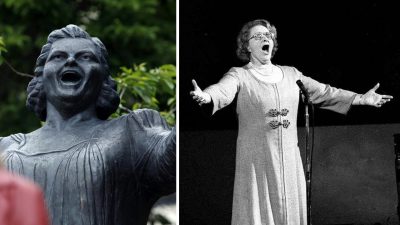 The Flyers also said that Smith’s “God Bless America” – a tradition before each home game – has been removed from their library. The lyrics in question are from several of her songs including one from 1939 that uses a derogatory term to reference black men.Her connection with the Flyers started in 1969 when a team executive ordered her version of “God Bless America” to be played instead of “The Star Spangled Banner.” Smith died in 1986 at the age of 79 and the following year, the  Flyers installed her statue.