Jody Wilson-Raybould and Jane Philpott are speaking out after being turfed from the Liberal caucus by Prime Minister Justin Trudeau. 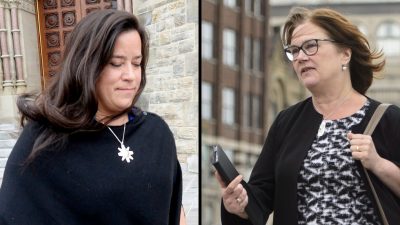 Wilson-Raybould says she’s not sorry for standing up for her principles. She admits to being disappointed, but says truth must always come first. She also used the Prime Minister’s own words in reacting to her removal from cabinet. Justin Trudeau called Wilson-Raybould’s actions to secretly record a conversation with the head of the Privy Council “unconscionable.” Raybould told reporters “it’s unconscionable not to uphold the rule of law.” Jane Philpott echoed a similar sentiment and said it’s too early to decide her political future. It was a raucous session in the House of Commons where the issued boiled over. Trudeau continued to dispute accusations that he’s a fake feminist but acknowledged the internal strife within his Liberal government. He told a group of young women that politics is often about reconciling opposite perspectives and differences of opinion.