A book that stirred controversy at Dalhousie University in Halifax is among those shortlisted for the 50-thousand-dollar Donner Prize. University Commons Divided; Exploring Debate and Dissent on Campus is one of five finalists for the award recognizing the best public policy book by a Canadian. 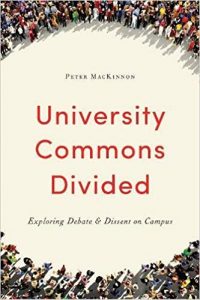 Author Peter MacKinnon’s interim appointment at the Eastern Canadian school earlier this year was met with outcry from a group of students who say the book expresses racist oppressive rhetoric prompting some to call for his dismissal. In the book, MacKinnon suggests there was a lack of proportion in outraged responses to campus incidents involving white students in blackface, saying these were “just Halloween parties.” Responding to the backlash, MacKinnon issued a statement saying he does not condone blackface. The winner of the $50,000 award will be announced in Toronto on May 1. The other nominated titles receive $7,500.

Other Donner finalists include

Indigenous Nationals, Canadian Citizens; From First Contact to Canada 150 and Beyond by Thomas J. Courchene (Institute of Intergovernmental Relations, Queen’s University)
Population Bombed! Exploding the Link Between Overpopulation and Climate Change by Pierre Desrochers and Joanna Szurmak
Basic Income for Canadians; The Key to a Healthier, Happier and More Secure Life for All by Evelyn L. Forget
Excessive Force; Toronto’s Fight to Reform City Policing by Alok Mukherjee with Tim Harper