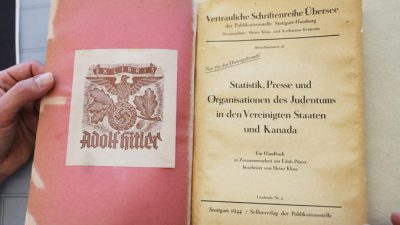 Library and Archives Canada has acquired a 1944 book that was once part of Adolph Hitler’s personal library. Researchers say the 137-page report titled “Statistics, Media, and Organizations of Jewry in the United States and Canada” could have served as a blueprint for a Nazi purge of Jews in North America. It features a stylized eagle and swastika and reports on the Jewish population of certain cities as well as key organizations and printing presses of Canadian and American Jewish communities.