Masazo Nonaka died peacefully in his sleep this morning in Japan at the age of 113. 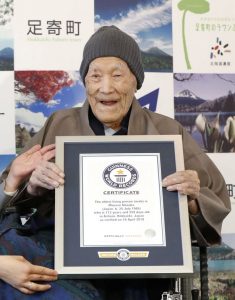 The supercentenarian, whose family has run a hot springs inn for four generations, was certified last year as the world’s oldest living man at 112 years and 259 days. He has outlived his wife and three of their five children. Nonaka was born on July 25, 1905, just months before Albert Einstein published his theory of special relativity. Japan is home to some of the world’s oldest people. 70,000 Japanese residents are over 100 years old including the world’s oldest person – a 116 year old woman.