A young Saudi woman who ran away from her family has landed at Toronto’s Pearson Airport Saturday morning where crowds gathered as this story gains international attention. Rahaf Mohammed Alqunun was accompanied by Foreign Affairs Minister Chrystia Freeland who told reporters the teen was too tired to speak with reporters but wanted to say hello before going to her new unspecified home in Canada. 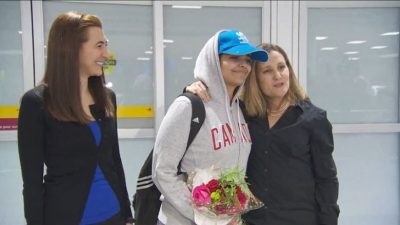 Alqunun fled what she alleges is an abusive family and is set to begin her new life in Canada. She ran away to Thailand where she barricaded herself in an airport hotel room and launched a Twitter campaign that drew global attention to her case. The United Nations High Commission for Refugees asked Canada to grant the 18-year-old asylum as a refugee. Prime Minister Justin Trudeau has brushed aside suggestions the move might further complicate already strained relations with Saudi Arabia.